So following on from ‘every piece of software eventually becomes microsoft office’ post, one day you’ll find yourself reimplementing powerpoint.

You’ll be doing this in javascript and html, because everything’s the web these days, and to start you on that journey, you’ll be using drawio, because it’s open source and not as crap as the alternatives.

Drawio is a great bit of kit, but suffers from some fairly fundamental design problems which I’m going to go into here.

tldr: Essentially all their distances are labelled wrong, and even if they were labelled right, they’re still wrong.

Here’s what drawio looks like embedded on a page:

If I’ved hooked that up correctly, you should be able to double click on the diagram and get an editor where you can change the diagram. Try scrolling up if it disappears. So what you get with next to no effort whatsoever is the ability for a user to:

You might notice that you can select the ‘paper size’ from the format panel, and that those sizes affect the drawing area, which in the full-page version of the app is measured on some rulers up the top and the left of the diagram. You’ll also notice that drawio gives you a few way of measuring things, with numbers appearing

as you drag things around:

or in text fields:

This blog is going to tell you that those measurements are all wrong, and what you can do to get them right for someone who actually wants 10pt text to be 10pt in their report, or for a cm to actually be a cm.

Everyone thought using ¹⁄₇₂” was perfectly reasonable back when there were 72 grains to the groat but is somehow still in modern usage.

Every computer in existence pretends that it uses 96 dots per inch ( DPI ) on the web, even the ones that say they have more DPI (e.g. your fancy retina displays), because they also scale the ‘dot’ in ‘DPI’ so that it’s 96 DPI and the ones that say they have less DPI (e.g. your apple-derived systems which say they’re 72 DPI) which pretend to be 96 on the web because otherwise the fonts look too big.

Take a read of https://www.scantips.com/no72dpib.html if you want a history lesson on that.

Most computer monitors have fixed resolutions ( e.g. my monitor is 2560×1440 dots a.k.a. pixels ) and varying sizes ( mine is 27″ across the diagonal ), which will give some value for DPI, but considering other monitors have different physical sizes but will have the same resolution means that DPI value isn’t going to be consistent across different displays.

So let’s just give up on being able to represent an inch accurately on a display, but that’s OK because no-one expects to be able to put a physical ruler up against their monitor to measure something accurately. 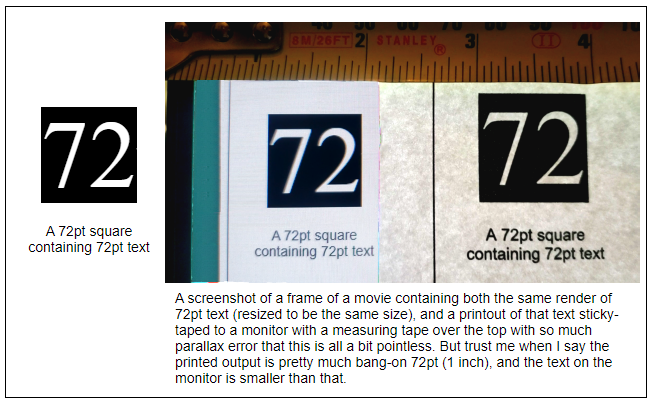 Fun fact: if you printed that out from your LaserWriter™® from a dusty 1984-era Macintosh™®, those would all line up. So that’s progress for you. On the other hand, they did advertise those WYSIWYG capabilities with women draped over lamborghinis, which you don’t get so much nowadays. *rocks back on rocking chair, spits into copper spittoon* apart from ads for graphics cards I guess. and motherboards. and light artillery. anyway.

Also remember that font sizes are measured in terms of a platonic ‘em square‘ rather than some property of the shapes of the actual letters, so the characters in different fonts (e.g. Times New Roman and Copperplate Century Script Italic) at the same point size may appear to have different heights. I’m ignoring that for now.

What was I talking about again ?

What we’re more interested in here is the paper output, which is something a bit more easily comparable than monitor output.

OK so because the internet is american, and americans still use imperial length measurements handed down from their freedom-despising English colonisers, you’ll notice that the default paper sizes are ‘Letter’ and ‘Legal’, which are defined in terms of inches rather than ‘A4’ which is defined in terms of something the rest of the world has long-since moved on to.

There’s a whole lot more than that of course, but those are the ones that everyone uses.

So those paper sizes become

And then you might wonder why drawio has labelled these units as “pt” on the Format/Arrange panel, when a “pt” is defined as 1/72th of an inch.

And then you might wonder why, when you draw a box which is 72pt x 72pt, why the dimensions of that box doesn’t look anything like the bounds of a character drawn in a 72pt font.

And the reason for that is because the people who created drawio have no coherent concept of distance, so you’ll be compensating for that in your code which prints out drawio diagrams from HTML, or converts drawio to and from pptx.

A coherent concept of distance

So what you need to remember is that

You’ll also discover that if you paste in HTML from some other website into a drawio text shape, that those font sizes become even more inaccurate, but that’s a completely different kettle of fish.

Let’s say you print out a drawio diagram that is on a ‘letter’ page.

You’re going to do this by getting a virtual browser to render the page, and then convert that page to PDF, a bit like hitting ‘Print’ in your browser and saving it down as a PDF.

So what you’ll be doing is zooming that diagram by 96% just before you print it, so that your 100 pixels to an inch diagram becomes 96 pixels to an inch, because that’s what it needs to be if you want a letter-sized diagram to generate a letter-sized PDF. You’ll also be removing the headers/footers that the browser normally adds to the page, and any margins, so that any full-page background images cover the entire paper size.

The magic CSS you need to sprinkle on your page to do that looks like this:

And the magic bit of javascript to zoom the diagram looks like this:

Well alrighty then, but that means any fonts which were previously being rendered at 96 DPI (i.e. before scaling, a 72pt font would appear 96px high), are now being rendered at 96 * 96/100 or 92.16 DPI (i.e. after scaling, a 72pt font would appear 92.16px high). So you’ll need to compensate for that by expanding the font by 100/96 in the drawio editor, so that when the user selects “72pt” then they get something that actually prints an inch high (100px in the prescale units, 96px in the postscale units).

There’s a couple of ways you can do that, none of which are really satisfactory.

First of all, notice that when you place a text shape in drawio, what you’re really doing is adding a foreignObject into the SVG, which in this instance is a foreignObject containing HTML.

The reason drawio does this is so you can do things like format things in bold and italics in the middle of a piece of text, which is something real users might expect to be able to do, but which is an utter bastard to do in SVG unless you enjoy measuring the size of individual characters in text spans.

So anyway what you might do is a create your own quasi-text shape in drawio that scales that foreignObject by 100/96 so that when you scale if by 96/100 at the end, the resulting text has the right dimensions on the page. And that more or less works.

But you might still need to support the native drawio text shape as well because you discovered this whole measurement bastardry a bit late in the development process, in which case you’ll just have to acknowledge that the units entered by the user are wrong, and contemplate changing the format panel to label those units as “cin” instead of “pt”, and label font points as bastard-points ‘bpt’ which are (1/72 * 96/100) = 1/75 of an inch instead of the much more universally acknowledged 1/72 of an inch for a real point.

Which you’re not going to do because you run out of time, so you just hope that nobody notices, which apparently no-one has up until now, and write up a post for your website instead.

Couple of other things I should mention:

There’s probably other solutions (e.g. changing drawio’s concept of how big a ‘letter’ page is) but those have their own set of problems which you can discover if you choose to do that.

Okay so Microsoft has also had to bridge the gap between imperial and metric units, which they’ve also decided to solve by inventing their own measurement system. That measurement system is called “EMUs” which stands for English Metric Units, which is a little bit better than drawio “cin” measurements inasmuch as they can be expressed as integers instead of rational numbers when converting between them up to some reasonable level of accuracy.

And to their credit, they don’t outright lie to you when they label those measurements in their UI ( they will round those numbers but it’s still the right ballpark ).

So you may not be able to get a camel to walk through the eye of a needle, but you could probably herd a few emus through there. How terribly amusing.

So those paper sizes in EMUs are

Fonts in powerpoint are defined in run properties, paragraph properties and shape properties, including multiple paragraph level properties set at both the shape and theme level, + two levels of templating ( slideLayouts and slideMasters ), which all interact with each other in unintuitive and undocumented ways. Also on top of that is the concept of ‘autosizing‘ which can affect text size, as well as 3d effects and wordart which you’re going to completely ignore unless you’ve got the resources of google at your disposal. By which I mean
the billions of dollars of developer time, not access to the google search engine.

Fonts in office products also have a fairly complicated and mostly undocumented fallback system if the computer you’re viewing the document on doesn’t have the font installed,
which you’re probably going to ignore as well until the client complains about it and then you’ll hack in something that sort of mostly works.

You’re probably going to limit yourself to just the types of formatting that can be easily expressed in HTML, since that’s what you’re going to be converting it to and from. In the drawio editor, text is editted by using a thin wrapper around a contentEditable DIV, and it’s not like you’re going to rewrite that.

But anyway, converting to and from powerpoint is complicated enough to describe in a separate blog post I reckon.